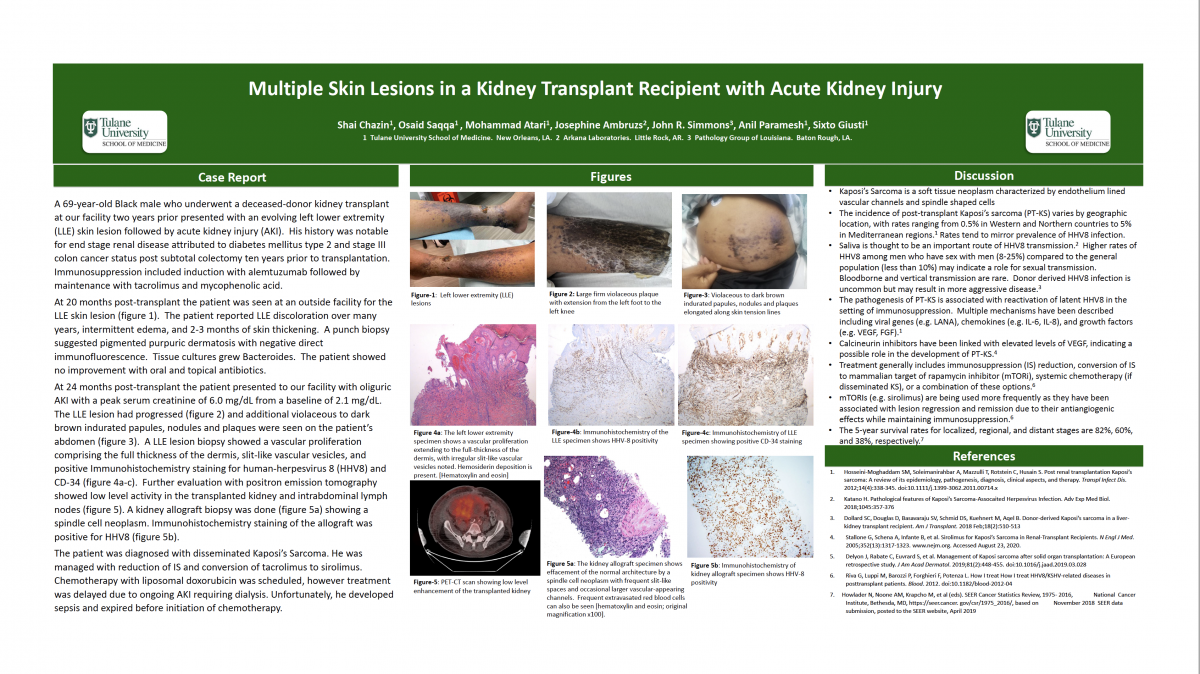 Introduction/Objective: Disseminated Kaposi’s sarcoma (KS) is a rare complication of immunosuppression in the setting of solid organ transplantation.

At 24 months post-transplant the patient presented with oliguric AKI with a peak serum creatinine of 6.0 mg/dL from a baseline of 2.1 mg/dL. The LLE lesion had become woody with violaceous plaques and papules on the proximal leg. Similar lesions were seen on his abdomen. A LLE lesion biopsy showed a vascular proliferation, slit-like vascular vesicles, and positive Immunohistochemistry (IHC) staining for human-herpesvirus 8 (HHV8) and CD-34, consistent with KS. Further evaluation with positron emission tomography showed activity in the transplanted kidney and intrabdominal lymph nodes. A kidney allograft biopsy showed a spindle cell neoplasm with vascular channels and positive IHC staining for HHV8.

The patient was diagnosed with disseminated KS. He was managed with reduction of IS and conversion of tacrolimus to sirolimus. Chemotherapy with liposomal doxorubicin was scheduled, however treatment was delayed due to ongoing AKI requiring dialysis. Unfortunately, he developed sepsis and expired before initiation of chemotherapy.

Discussion: KS is a soft tissue neoplasm characterized by endothelium lined vascular channels and spindle shaped cells. The incidence of post-transplant KS (PT-KS) varies by seroprevalence of HHV8, with rates of 0.5% in Western and Northern Countries to 5% in the Mediterranean region. The pathogenesis of KS begins with reactivation of latent HHV8 infection in the setting of immunosuppression. Viral genes (e.g. latency-associated nuclear antigen) and growth factors (e.g. vascular endothelial growth factor [VEGF]) are implicated as pathogenic mechanisms. Calcineurin inhibitors may play a role given their association with elevated levels of VEGF. Treatment of PT-KS involves reduction of immunosuppression, possible conversion to a mammalian target of rapamycin inhibitor (e.g. sirolimus), and systemic chemotherapy if there is metastatic disease. The 5-year survival rate for disseminated KS is 38%.

Conclusion: Disseminated PT-KS is a rare complication for transplant recipients with significant morbidity and mortality. A high degree of clinical suspicion is needed for early diagnosis.