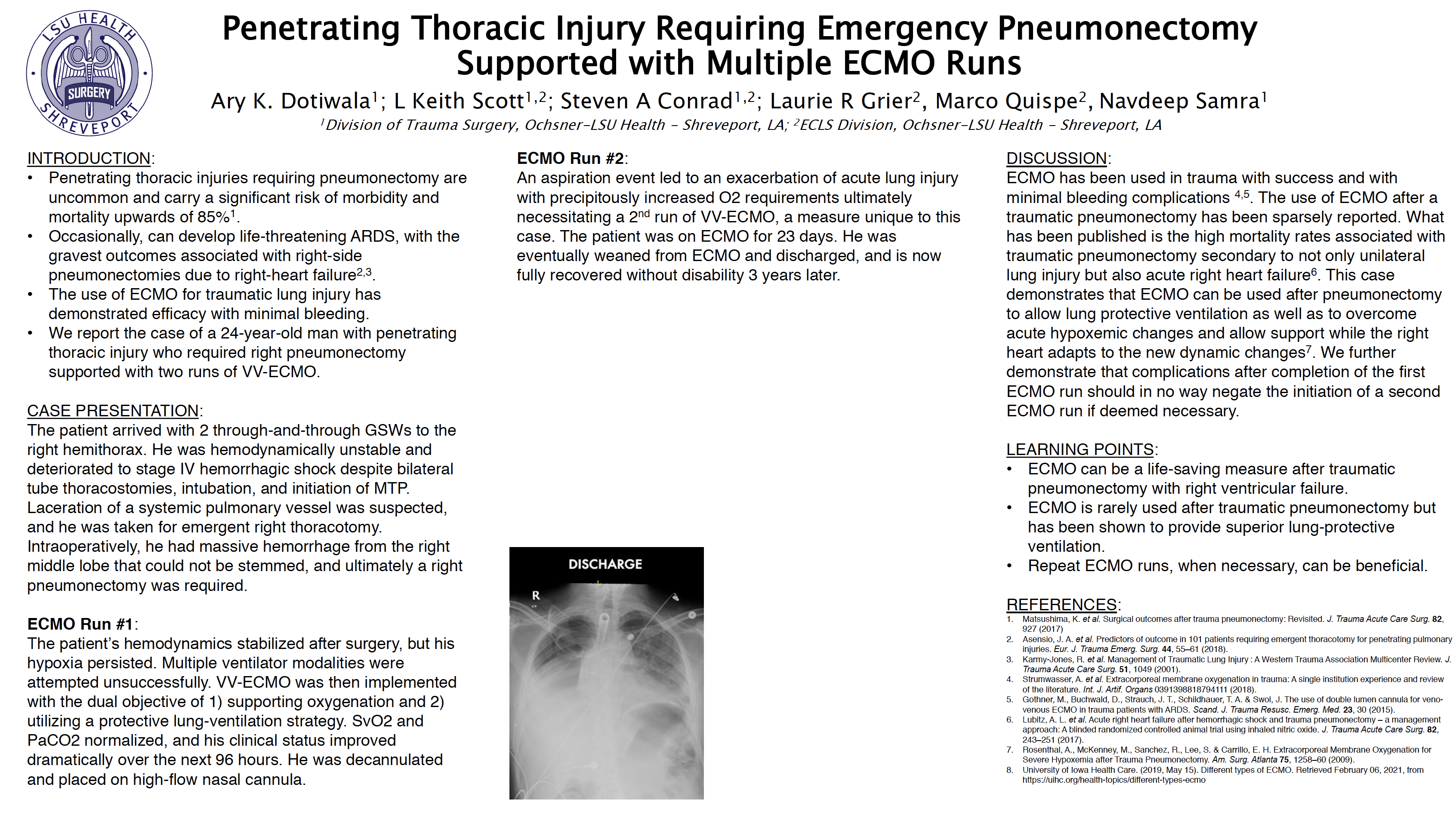 Introduction/Objective: Penetrating thoracic injuries requiring pneumonectomy are uncommon and carry a significant risk of morbidity and mortality upwards of 85%. Occasionally, these patients can develop life-threatening ARDS, with the gravest outcomes associated with right-side pneumonectomies due to resultant right-heart failure. Furthermore, the use of ECMO for traumatic lung injury has demonstrated efficacy with minimal bleeding complications.

Case Presentation: We report the case of a 24-year-old gentleman with penetrating thoracic injury who required right pneumonectomy supported with VV-ECMO for post-operative respiratory failure. The patient first arrived with 2 through-and-through gunshot wounds to the right hemithorax. He was tachycardic and hypotensive with GCS 8, and deteriorated to stage IV hemorrhagic shock with agonal respirations despite bilateral tube thoracostomies, intubation, and initiation of MTP.

Discussion: The patient’s hemodynamics stabilized after surgery, but his hypoxia persisted. Multiple ventilator modalities were attempted unsuccessfully until the decision was made to start VV-ECMO, with the dual objective of supporting oxygenation and allowing for a superior protective lung-ventilation strategy. Subsequently, SvO2 and PaCO2 normalized, and his clinical status improved dramatically over the next 96 hours. He was decannulated and placed on high-flow nasal cannula; at this point, he was awake, conversant, and tolerating a diet. However, a subsequent aspiration due to emesis after initial decannulation led to an exacerbation of acute lung injury with precipitously increased oxygen requirements, and ultimately necessitated a second run of VV-ECMO support, a measure unique to this case. The patient was on ECMO for 23 days until weaned. He was eventually discharged and is now fully recovered without disability 3 years

Conclusion: This case demonstrates that ECMO can be a life-saving measure after traumatic pneumonectomy accompanied by severe right ventricular failure or lung failure. This is the first case we are aware of that used ECMO twice on a patient after pneumonectomy and a subsequent lung injury.

The use of ECMO after traumatic pneumonectomy has been sparsely reported; this case demonstrates that ECMO can be used after pneumonectomy to allow for lung-protective ventilation as well as to overcome acute hypoxemic decompensation and allow cardiorespiratory support while the right heart adapts to the new hemodynamic changes.

We further demonstrate that complications after completion of the first ECMO run should not preclude the initiation of a second ECMO run if deemed necessary.